The Movements of the ‘60s: A Legacy for Today, Diane Nash

Brookens Library is proud to have co-sponsored the ECCE Speaker Series event The Movements of the ‘60s: A Legacy for Today, Diane Nash on Thursday, September 13. To bridge the event with our Collections, Faculty Librarian Nancy Weichert brought a mobile checkout station and a small collection of materials related to Nash’s area of work.  Sarah Sagmoen, Director of User Services & faculty liaison to Necessary Steps, and University Librarian Dean Piotrowski also participated in the event. 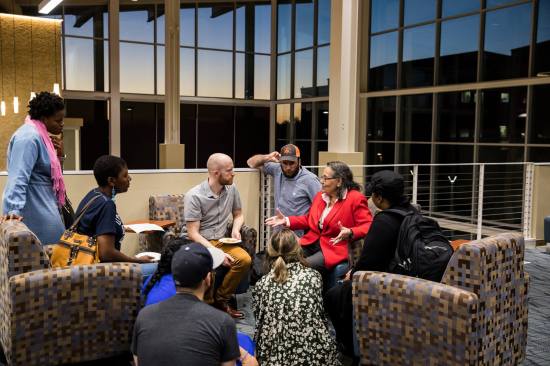 Diane Nash’s involvement in the nonviolent movement began in 1959 when she was a student at Fisk University. In 1960, she became the chairperson of the student sit-in movement in Nashville – the first southern city to desegregate its lunch counters – as well as one of the founding students of the Student Non-violent Coordinating Committee. She coordinated the Freedom Ride from Birmingham, Alabama to Jackson, Mississippi in 1961. Her arrests for civil rights activities culminated in Nash being imprisoned for 30 days in 1961, while she was pregnant with her first child. Undeterred, she went on to join a national committee—to which she was appointed by President John F. Kennedy—that promoted passage of the Civil Rights Act of 1964. Nash later became active in the peace movement that worked to end the Vietnam War, and became an instructor in the philosophy and strategy of non-violence as developed by Mohandas Gandhi.
(source)

A Selection of Online Library Resources Available Through Brookens

The African-American Years: Chronologies of American History and Experience

Published since 1964, this is the definitive bibliographic reference covering the history, culture, area studies, and current affairs literature of the United States and Canada, from prehistory to the present.

Organized around the history of women in social movements in the U.S. between 1600 and 2000, this collection seeks to advance scholarly debates and understanding about U.S. women’s history
The collection currently includes 125 document projects and archives with more than 5,100 documents and 175,000 pages of additional full-text documents, written by 2,800 primary authors. It also includes book, film, and website reviews, notes from the archives, and teaching tools.

Brings the 1960s alive through diaries, letters, autobiographies and other memoirs, written and oral histories, manifestos, government documents, memorabilia, and scholarly commentary. With 125,000 pages of text and 50 hours of video at completion, this searchable collection is the definitive electronic resource for students and scholars researching this important period in American history, culture, and politics.

A selection of Print Library Resources Available Through Brookens

Freedom riders: 1961 and the struggle for racial justice by Raymond Arsenault
Black revolt; strategies of protest by Doris Yvonne Wilkinson
Strategies for freedom: the changing patterns of black protest by Bayard Rustin
Black protest in the sixties by August Meier
The lost dream of equality: critical essays on education and social class by Alan Scott
Women and the civil rights movement, 1954-1965 by Davis Houck
Living through the civil rights movement by Charles George
Voices of freedom: an oral history of the civil rights movement from the 1950s through the 1980s by Henry Hampton
The origins of nonviolence: Tolstoy and Gandhi in their historical settings by Martin Burgress Green
Many minds, one heart: SNCC’s dream for a new America by Wesley Hogan
Teaching peace: nonviolence and the liberal arts by Denny Wever

A selection of Films Available Through Brookens