Sunday, March 8th was International Women’s Day. Perhaps you noticed articles in the news about women (and men!) in countries all over the world who staged marches, protests, celebration and, in the case of Mexico, a gender strike. In Springfield, the home of UIS, there was a rally at the state capitol accompanied by speeches from several women activists and political figures and recitations by local poets decrying global gender inequities. The turnout was impressive for a Sunday afternoon – around 300. Around the world, this scene was replicated in cultural and political specifics.

International Women’s Day started in 1909 and was originally organized by the Socialist Party of America. In 1910, at the international Socialist Women’s Conference, it was proposed that it be organized annually.  Following on the heels of the women’s suffrage in Russia in 1917, March 8th became the officially designated date and, to this day, it is a national holiday in Russia. In 1967, the feminist movement adopted it and the United Nations began celebrating it in 1977.

This year is particularly notable for U.S. women as we celebrate the 100th anniversary of the 19th amendment to the Constitution, which gave women the right to vote.

Congress shall have power to enforce this article by appropriate legislation.

The Library of Congress in Washington, D.C. has curated an exhibit to commemorate this historic event called Shall Not Be Denied: Women Fight for the Vote, which will be running through September 2020.  If you cannot make it to D.C., you can explore aspects of the exhibit online.

In tandem with this, the National Portrait Gallery (Smithsonian, Washington, D.C.) has a extensive exhibit which includes hundreds of objects as well as manuscripts. It is entitled Votes for Women. The exhibit is impressive for its breadth and depth and would be well worth your time if you are in the nation’s capital. But if you are unable to see it in person you can explore aspects of it online, here at this link.

In addition to the exhibit, the National Portrait Gallery published a companion book – Votes for Women: A Portrait of Persistence, which you can find in the new books section at Brookens Library (Call #: KF4895 .L46 2019).

Notably, the Suffragettes pioneered picketing the White House for political causes as they were the first group of people ever to do so.

Brookens Library has many books and video resources for exploring this important historic event.  Here are a couple to get you started:

Marking the centenary of the ratification of the Nineteenth Amendment in 1920, Votes for Women celebrates past efforts while looking toward what actions we might take in the future to further support women’s equality. – Taken from the Introduction.

And Yet They Persisted: How American Women Won the Right to Vote by Johanna Neuman. Call # JK1896 .N48 2020 (located in New Books section)

And Yet They Persisted traces agitation for the vote over two centuries, from the revolutionary era to the civil rights era, excavating one of the greatest struggles for social change in this country and restoring African American women and other women of color to its telling. Author Johanna Neuman demonstrates that American women defeated the male patriarchy only after they convinced men that it was in their interests to share political power. Reintegrating the long struggle for women’s suffrage into the metanarrative of U.S. history, Dr. Neuman sheds new light on such questions as why it took so long to achieve equal voting rights for women, how victories in state suffrage campaigns pressured Congress to act, why African American women had to fight again for their rights in 1965, and how the struggle by eight generations of female activists finally succeeded. – Taken from book cover

This film is the dramatized story of Alice Paul and Lucy Burns, leaders of the suffragist women who fought for the passage of the 19th Amendment. They broke from the mainstream women’s rights movement to create a more activist wing, daring to push the boundaries to secure women’s voting rights in 1920.

If you are a history buff and want to do more extensive research on your own using primary source materials, here are a couple of specialized database resources to get you rolling.

Women and Social Movements in the United States: The focus of this resource is on women’s activism and spans four centuries from 1600-2000.  There are over 125 document projects and archives, approximately 4,700 publications, a chronology of women’s history, teaching tools, book and web site reviews, archival news regarding primary sources in U.S. Women’s History, a digital archive with a focus on federal, state, and local commissions on the Status of Women between 1961 and 2005. It also includes a dictionary of social movements and organization along with an online edition of the five-volume biographical dictionary, Notable American Women (1971-2004).

This past year has been the advent of so many milestones for women in the U.S.  There are currently 131 women in both chambers of the 116th Congress, up by 130 from the sole congresswoman elected to federal office in 1917 in Montana.  And for women of color, the outcome is unprecedented. In “the 116th U.S. Congress 47 of the 127 women serving or 37.0%, are women of color; in addition, a Black woman, a Latina, an Asian Pacific Islander, and a Caribbean American woman serve as Delegates to the House from Washington, DC, Puerto Rico, American Samoa, and the Virgin Islands, respectively. Women of color constitute 8.8% of the total 535 members of Congress,” (CAWP).  Surely this is the year of the woman.

As we celebrate the current victories of women making political waves, let us remember some of the pioneers who paved the way for the successes of today.  The Center for American Women and Politics (CAWP) at Rutgers University provides fact sheets and timelines highlighting historic firsts for women: who have run for the Presidency (the first was Victoria Woodhull who ran on the Equal Rights Party ticket in 1872), elected to Senate (the first woman elected to the Senate was Hattie Wyatt Caraway (AR) in 1931), elected to the House (Jeannette Rankin was the first elected in 1917 and the only lawmaker to vote against U.S. entry into both world wars!), and of color (Soledad Chacon was elected Secretary of State in New Mexico in 1923.  She was the first Latina and woman of color to hold a statewide elected executive office, Cora Belle Reynolds Anderson was the first Native American elected to a state legislature in 1924 (Michigan) and Minnie Buckingham Harper was the first Black woman in a state legislature).  Illinois can boast Carole Mosely Braun as the first female African-American Senator (1993-1999) and Michelle Obama as the first African-American first lady of the U.S.  But we still have a long way to go.  Visit the CAWP website to see a historic timeline highlighting other significant firsts and the progression of successes leading up to recent achievements and statistics at all levels of government.

For access to more resources on women and the law visit Brookens’ LibGuide Women & Gender Studies – Law as well as the Legal Studies LibGuide.

A couple of specialized databases for accessing historic primary source material on or by women are the following:

Women and Social Movements in the United States:  The focus of this resource is on women’s activism and spans four centuries from 1600-2000.  There are over 125 document projects and archives, approximately 4,700 publications, a chronology of women’s history, teaching tools, book and web site reviews, archival news regarding primary sources in U.S. Women’s History, a digital archive with a focus on federal, state, and local commissions on the Status of Women between 1961 and 2005.   It also includes a dictionary of social movements and organization along with an online edition of the five-volume biographical dictionary, Notable American Women (1971-2004).

We will have a series of 3 blog posts dedicated to to the theme. The first post in the series will feature items from withing our collection based on “Character”, the second will focus on “Courage” and the third will highlight “Commitment”.

The following are the National Women’s History Project’s 2014 Honorees. 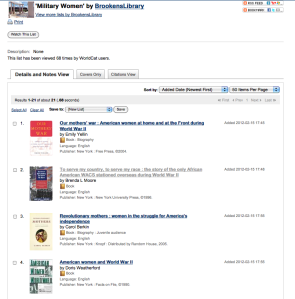 March is Women’s History Month!!  Brookens has put together a book list featuring resources from our collection about Military Women! Throughout the month of March we will also have a bulletin board display featuring Women in the Military, specifically WASPs (Women’s Airforce Service Pilots). We hope you enjoy both the display and the items from our collection we are featuring!